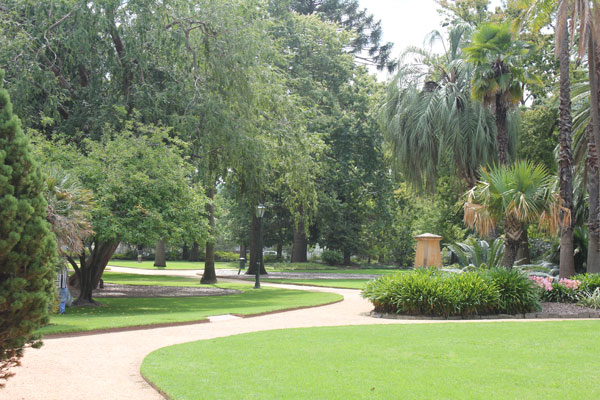 Albury is a major regional city in New South Wales, Australia, located on the Hume Highway on the northern side of the Murray River. It is the seat of local government for the council area which also bears the city's name – the City of Albury. Albury has an urban population of 45,627 people.

Albury is separated from its twin city in Victoria, Wodonga by the Murray River. Together, the two cities form an urban area with a population of more than 80,000. It is 462 kilometres (287 mi) from the state capital Sydney and 326 kilometres (203 mi) from the Victorian capital Melbourne.

Said to be named after a town in England, Albury developed as a major transport link between the colonies of New South Wales and Victoria and was proclaimed a city in 1946.

Albury has a warm, temperate, four-season climate, with cool to mild winters and very warm to hot summers. In summer, the mean daily maximum temperature is 30 °C (86 °F) with low humidity; however, this is subject to substantial daily variation. An average of 17 days with a maximum above 35 °C (95 °F) occur in this summer period. Mean winter maximums are 14 °C (57 °F) with many crisp, sunny days. Frosts are commonplace in winter, with approximately 20 days per year featuring minimums of below freezing. 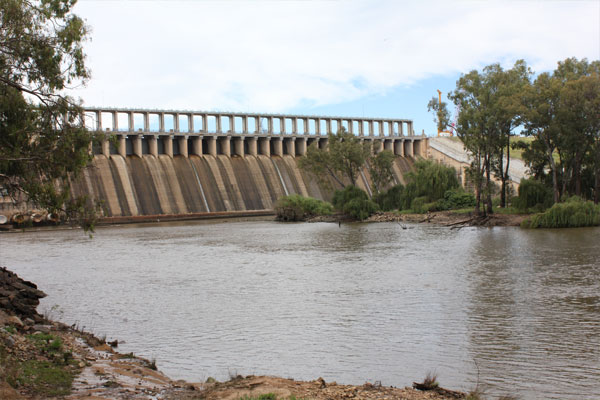 The city comprises a number of suburbs.

Central Albury comprises the central business district (CBD) and lies between the railway line, the Murray River and Monument Hill. Much commercial activity is concentrated here, with Dean Street forming the axis of the main shopping and office district. A cultural precinct is centred on QE2 Square, including the Albury Library Museum, Albury Regional Art Gallery, Albury Performing Arts Centre and Convention Centre, and the Murray Conservatorium. In the same block are the Post Office, Police Station and Courthouse, and St Matthew's Anglican Church (which was rebuilt after being destroyed by fire in 1990). The Albury City Council offices are located on Kiewa Street.

Forrest Hill lies directly north west and covers the saddle between Monument Hill and Nail Can Hill. West over the ridge lies West Albury. West Albury is primarily a residential area, but it is home to the First World War Memorial (locally known as the Monument), Riverwood Retirement Village, Albury Wodonga Private Hospital (which lies on the corner of Pemberton Street and the Riverina Highway), and the Albury sewage treatment plant. All of West Albury was once wetland and bush. The only remnant of this is Horseshoe Lagoon to the south-west of the suburb, which has been declared a Wildlife Refuge by NSW Parks & Wildlife and incorporated into the Wonga Wetlands. To the north-west of West Albury is Pemberton Park.

East Albury lies east of the railway line/freeway from the CBD and houses now cover the eastern hill alongside the Albury Base Hospital, while the flat land directly north of it is covered by parkland, housing and light industry, and a retail park including Harvey Norman and Spotlight franchises, as well as the city airport. The Mungabareena Reserve lies on the Murray south of the airport, and is considered an Aboriginal cultural site of some significance. Mungabareena means "place of plenty talk" in the Wiradjuri language.

South Albury is a mix of residential and industrial areas, with the floodplains south of the railway line and freeway still used for farming and grazing. Flood mitigation works in the 1990s have dramatically reduced the risk of flooding in this area.

North Albury was once covered by orchards and vineyards in the first half of the 20th century, as was a swamp where the James Fallon High School now stands; after the Second World War housing development in the area increased and Waugh Road was extended from David Street to the "Five Ways" intersection at Union Road, which ascribes the border between North Albury and Lavington. The locality of Glenroy is adjacent to North Albury, west of the Bungambrawartha Creek, and housing was developed here in the 1970s, including a significant Housing Commission public housing estate.

Lavington is the largest suburb of Albury, and the only suburb which has its own postcode (2641, as opposed to 2640 for the balance of Albury). The suburb was originally named Black Range in the 1850s and 1860s, before being renamed Lavington in 1910. Originally within the boundaries of Hume Shire, it was absorbed into the City of Albury Local Government Area in the 1950s. Housing and commercial development has continued from that point until this day. Prior to 2007, the Hume Highway – passed north-east through the suburb, with Urana Road passing north-west though the suburb from the "Five Ways" road junction. In 2007, an internal bypass of the Hume Freeway was opened, with the former name of the Hume Highway section officially reverting to the commonly used "Wagga Road". The suburb of Lavington also includes the localities of Springdale Heights, Hamilton Valley and Norris Park. Albury's lawn cemetery and crematorium lies at the western end of Union Road.

Thurgoona, to the east of Lavington, was established as a new residential suburb by the Albury Wodonga Development Corporation in the 1970s. In the 1990s a new campus of the Charles Sturt University was established here, as was an office of the Murray Darling Freshwater Research Centre. A major golf club (Thurgoona Country Club Resort) is also situated in this suburb.

Further outlying localities include Splitters Creek – a small residential/farming community to the west, Ettamogah (home of the Ettamogah Pub), Bowna and Table Top to the north, and Wirlinga and Lake Hume village to the east. Howlong (20 km west) and Jindera (16 km north) are the closest towns outside the Albury city area, and act as commuter dormitories as well as service centres for the local rural industries.

Albury's houses and buildings are numbered using a special system introduced in 1920. The centre of the city, which is defined as the intersection of Dean and Olive Streets, is numbered 500, and all other houses are numbered depending on whether they are north, south, east or west of the centre.

Albury is home to one of the campuses of Charles Sturt University. The original Albury campus was located in the northern part of the CBD between Kiewa and David Streets. Charles Sturt University relocated to a new purpose built campus at Thurgoona in 2009. CSU offers courses in Arts, Business, Education and Science. It plays a key role in drawing aspiring students to the area, taking candidates from all over Australia.

Riverina Institute of TAFE operates a campus in Albury. There is also a campus of the UNSW Rural Clinical School of Medicine adjacent to the Albury Base Hospital.